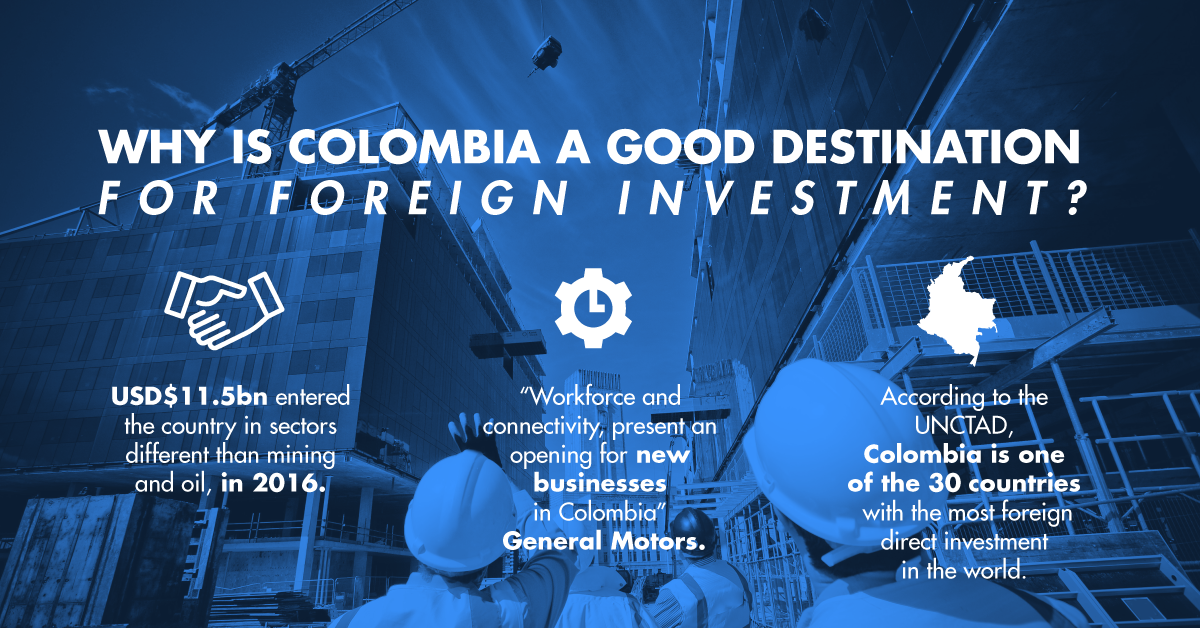 Why is Colombia a good destination for foreign investment?

The United Nations Conference on Trade and Development (UNCTAD)

That figure confirms that the country has earned an important place in terms of being an attractive destination for foreign investment and that there are more and more opportunities for investment in Colombia. In fact, according to the United Nations Conference on Trade and Development (UNCTAD) Colombia is one of the 30 countries with the most foreign direct investment in the world.

With PROCOLOMBIA's help you can learn first hand where to invest in Colombia, how to go about it and expand your business in the region.

The following are some of the success stories that reflect the varied investment options in Colombia and benefit both the country's economy and the business of the foreign companies in the various sectors.

Having already signed an automobile agreement with Brazil, the US's General Motors decided to invest USD$12m to increase production and supply in both the local market and the region.

This is foreign investment in Colombia that goes straight to the company's vehicle assembly plant and includes, besides a production line for a new model, improvements in the current facilities that will increase General Motors' competitiveness in the market.

It's an example of how the country's efficient workforce and connectivity present an opening for new businesses in Colombia. General Motors expects to export almost 2,000 units of its new model to Brazil and will benefit while, at the same time, fulfilling its commitment to the President of the Republic to increase Colombian exports.

Just as it did with General Motors, PROCOLOMBIA facilitated the arrival of the well-known sports brand Decathlon, which came from France to open its first specialized store in Bogotá.

Besides initiating a new market, the store generates employment in Colombia and has an initial payroll of 60 local employees. Why did Decathlon choose to invest in Colombia? The stable economy and the fact the market has a high potential, will allow Decathlon to expand its operations in the medium term as it takes advantage of the business opportunities in Colombia, not just in Bogotá.

Yara International is a Norway-based company that specializes in nitrogen chemistry, such as the production of agro-chemicals, and it has sales to 150 countries. This global presence has led the company to report revenues of more than USD $12bn, as it did in 2014, and has almost 13,000 employees on its payroll.

That same year the multinational bought Abocol (Abonos de Colombia SA) and accounted for 40% of the country's market, with an estimated volume of 1.5 million tons per year. In 2016, with PROCOLOMBIA's support and management, the company decided to make a USD$43m foreign investment in Colombia to expand the product's storage warehouse in Cartagena, which will receive the plant's consumables and mixers. Yara is a key example of the different investment options in Colombia in cities such as Bogotá, Medellín, Cali and Barranquilla, each of which can be appropriate depending on the needs of foreign companies.

Investments that drive the export of Colombian products

The Cacao de Colombia company, best known for its Cacao Hunters brand, established a second production plant in Popayán, in the department of Cauca, thanks to the Acumen Investment Fund in the US. Acumen invested US$1.15 million that will directly benefit the lives of 4,700 Colombians dedicated to the small-scale production of cacao.

Besides making a positive impact on the farm workers in the region, Acumen's investment also has an impact on Cacao de Colombia's exports. The company has a strong potential for exporting to Asian markets and hopes to increase its overseas sales by at least 25%, which is now a firm possibility thanks, in part, to PROCOLOMBIA.

If you are considering where to invest in Colombia, we invite you to learn about the different services offered by PROCOLOMBIA, which will bring you closer to sectors of the country's economy outside of oil and mining. These are just some of the examples of how the economy has diversified and remained stable, which has allowed international companies to make considerable foreign investments in Colombia and achieve success by establishing themselves in the local market.