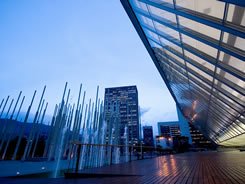 Bogota. The work that PROCOLOMBIA has done to attract foreign direct investment and the management of their system Enabler to Attract Investment (SIFAI) has stood out among 55 investment promotion agencies in the world that also applied for the global innovation award within this field.

PROCOLOMBIA was one of the two entities recognized in the category of Promotion Policies at the Financial Times’ FDI Intelligence global innovation awards.

" PROCOLOMBIA is committed to improving the business climate in the country. The System Enabler to Attract Investment is a public-private tool that allows the identification of the impact from sectoral economic reforms. Its online platform allows data collection and potential improvements that can result in the creation of new jobs and solutions that encourage new investments " stated the FDI Intelligence report.

FDI Intelligence chose the winners of the 2013 Investment Promotion Agencies Innovation Awards taking into account innovative promotional practices from those entities that contributed to increase competitiveness and who seek to go beyond servicing entrepreneurs as an evaluation criteria.

The System Enabler to Attract Investment (SIFAI) is a public / private tool that helps identify and centralize information about improvements within the investment realm that the country needs to implement in order to increase foreign capital inflows in addition to expand investors that are already present in the country. This way, the adoption of necessary reforms is endorsed.

Since the creation of this tool in 2009, SIFAI has driven the discussion, the analysis and the recommendations to improve standards, its applications, interpretations and the practices that state agencies need to do to enable foreign direct investment.

Once the issues that require improvements are identified, the interdisciplinary group made up of the Minister of Commerce, Industry and Tourism; the Senior Advisor of Public and Private Management; the National Planning Director; the President of PROCOLOMBIA and the President of the Private Competitiveness Council (private sector representative) meet to prioritize, propose actions and monitor the proposals to be adopted by the relevant public entities.

" SIFAI is a support tool for investors who can access it whenever they detect areas for improvement that impact investment opportunities transversely, with the objective that the issues are being addressed by the appropriate bodies. Currently there are 43 improvement opportunities in the system, of which 19 have been resolved, 10 are a priority and the other 14 are being reviewed aimed to improve the investment climate in the country, " said the president of PROCOLOMBIA, Maria Claudia Lacouture.

Some of the 2013 SIFAI activities

Foreign trade: Influence to lessen the requirements to access the VAT exemption for export of services.
Film Industry: Effort to extend the benefits of the Film Law to the digital animation industry.
Immigration regime: Participation in the immigration reform where the requirements for obtaining work visas and investor visas related to real estate acquisition