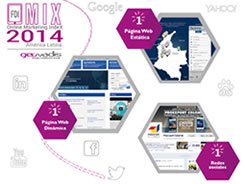 As for the social media category, PROCOLOMBIA is the office with more followers in its twitter account (@proexportcol) with 64,700, while its Facebook account (https://www.facebook.com/Proexport) it has 29,900 followers. The highlights in this category include good practices like continuous content updates, use of hashtags (#InviertaenColombia and #InvestinColombia), visual resource posting, and interactions with entrepreneurs interested in learning more about the benefits of investing in Colombia.

“PROCOLOMBIA publishes essential specialized information in both English and Spanish so that investors can learn about the country’s potential and the opportunities available to build their business,” stated Maria Claudia Lacouture, President of Proexport.

She also explained that these digital tools support the strategy to attract foreign investment, and allowed to launch 238 new projects in Colombia with an approximate worth of $7,732 million USD between August of 2010 and March of 2014.

Thanks to the promotion office’s efforts to position Colombia as an attractive destination for foreign companies, French export credit agency COFACE will rank Colombia among the top 10 emerging countries with the greatest development potential. This way, the country is now part of the PPICS group, including Philippines, Peru, Indonesia, Colombia, and Sri Lanka, which are expected to pull ahead of the BRICS group.

Also in 2013, the United Nations Conference on Trade and Development (UNCTAD) placed the country among the 18 economies that welcome the most investment in the world, and the United Nations Economic Commission for Latin America and the Caribbean (UNECLAC) emphasized the country’s economy as the third in welcoming the most capital in Latin America. In addition, The Economist forecasted that Colombia will be one of the six countries that will contribute the most to global development in the next decade.

Thanks to PROCOLOMBIA’s operations, Spain is the second source of capital in Colombia with 32 investments. These investments include three new hotels by Iberostar Hotels & Resort and Sol Melia; leading companies in the BPO and IT services market like Telemark and Unisono leverage the country’s position as an exporting platform thanks to being located in a free trade zone, providing services in English, Portuguese, and Spanish to Europe, America, and Latin America.

Between August of 2012 and March of 2014, the third source of investment was Canada with 20 projects. The new FDI diversification coming into Colombia is also evidenced through an innovation center BlackBerry installed in Bogota; corn, soy, and lentil production in Vichada; mining and oil-related services in Rionegro, and equity funds, among others.

During the last three and a half years, the UK implemented 18 investment projects in Colombia. For example, Unilever has installed two manufacturing plants and a distribution center in Valle del Cauca, and will soon open their detergent plant, where 30% of the total production will be exported. On the other hand, Holtrade revealed its interest in participating in railway sector bids, but also in initiatives related to equity funds, metalworking, telecommunications, logistics, IT services, among others.

In PROCOLOMBIA’s ranking of investment source countries, China follows with 12 projects, then Brazil with 12, Chile with 10, India with 9, Germany with 9, Argentina with 8, Mexico with 8, Portugal with 4, France with 4, Guatemala with 3, Japan with 3, Puerto Rico with 3, Switzerland with 2, and Belgium, South Korea, United Arab Emirates, Israel, New Zealand, Czech Republic, Singapore, Turkey, and Peru with only one project each.

The arrival of investments to 44 municipalities from 22 departments was possible thanks to the teamwork between PROCOLOMBIA and 10 local investment offices. This way, in the last three years Bogota has been able to attract 108 projects, followed by Antioquia with 33 projects, Atlantico with 17, Valle del Cauca with 14, Cundinamarca with 13, Bolivar with 8, Magdalena and Risaralda with 6 each, Meta and Santander with 5 projects per department, Boyaca, Caldas, and Vichada with 4 projects, respectively, Cesar and Norte de Santander with 2 each, and finally Casanare, Cauca, Choco, Cordoba, La Guajira, San Andres, and Sucre with one project each.