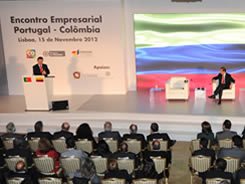 During the first official visit from a President of the Republic to Portugal, it was possible to gather the most important entrepreneurs of the country, to get acquainted with the benefits of investing in Colombia firsthand.

During the opening ceremony of the Entrepreneurial Forum: "Colombia, a world of opportunities" organized by PROCOLOMBIA; they highlighted the positive period of economic relations between both countries, which has caught the eye of important Portuguese companies that have decided to make significant investments that contribute to the development of the economy and job generation.

The forum was opened by the Prime Minister of Portugal, Pedro Passos Coelho, and the President of the Republic, Juan Manuel Santos.

According to the Central Bank (Banco de la República), Portugal was the forty first source of foreign direct investment in Colombia between 2000 and the first semester of 2012, with around USD$ 17.1 million accumulated and a share of 0.04%.

The arrival of companies such as Jerónimo Martins, the Pestana Hotels Resorts group and Prebuild, are up to this point the main characters in the "Portuguese rebirth" in Colombia.

There are several factors that have made Portuguese entrepreneurs look towards Colombia when seeking for new business. The economic downfall in Europe has made several countries seek new alternatives that guarantee growth and an appealing profitability for their business. Portugal has decided to take a leap towards Latin America and has found a land with advantages in the country.