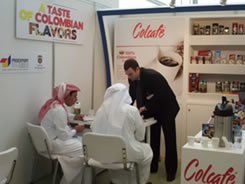 In Dubai, buyers from 37 countries show interest in the Colombian offering

Dubai, Arab Emirates. During the first day at Gulfood 2012, the four participating Colombian companies were visited by buyers from 37 countries, mostly coming from Africa, the Middle East and Asia.

The Colombian companies traveled with the support of PROCOLOMBIA, seeking for new markets for their products such as dehydrated uchuva, chocolate covering, cocoa liquor, cocoa butter, specialty coffees and cookies.

The companies Colcafé, Terrafértil, Noel and Casa Luker are located in the Colombian exhibition stand with PROCOLOMBIA, where they also offer product sample tastings to over 60 thousand visitors attending the fair.

In the face of the new business opportunities identified by PROCOLOMBIA in the Middle Eastern countries, specifically for dried and dehydrated products, one of the Colombian companies, Terrafértil, registered the dehydrated uchuva in the Gulfood Awards contest under the category of best new healthy ingredient.

Gulfood is acknowledged as the most important food fair in the Middle East, and is held at the Dubai International Convention and Exhibition Centre in the Arab Emirates.