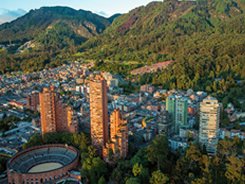 In the article, the analyst Heather West from the Mergermarket Group (a financial counseling agency for the Financial Times) said that Colombia has an attractive policy to foreign investment and its strengths in several indicators, such as their GDP growth of 4%, let it stand out within the continent.

Among the reasons why Colombia is compared to Indonesia, is for its continued growth in their population, it being the third largest in South America. Additionally, because cities like Bogota, Cali and Medellin are noticeable for their population growth and the strength of their economies, all attractive features for international decision makers.

Forbes noted that investments in infrastructure for the coming years would be an additional opportunity to attract investment.

Finally the report highlights the positive results of some of the foreign companies operating in Colombia and the success the interregional Latin-American companies have achieved in their international expansion process.