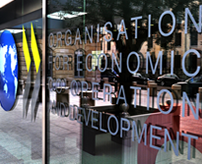 The Organization for Economic Cooperation and Development (OECD) released the Economic Survey of Colombia 2015, highlighting the country’s outstanding economic performance and economic policy management and accountability.

The survey examined the government’s macroeconomic policies, emphasizing that Colombia has sustained a steady economic growth during the last decade, which has served to narrow the gap with developed countries.

The OECD informed that economic success comes as a result of the public finance discipline imposed by tax regulations, a sound monetary policy that keeps inflation levels low, and a strong financial system.

The international organization forecasted significant investments in the region in the short run thanks to fourth generation (4G) highway concessions and greater foreign demand derived from the United States’ economic recovery.

According to Alvaro Pereira, Director of the Country Studies Branch at the Economics Department of the OECD, Colombia moved forward in poverty reduction and middle class growth and through achievements in the 2012 and 2014 tax reforms, proof of responsible economic policies.

The OECD recommended extensive simplifications to the tax system, and to lower the income tax for companies, remove investment taxes, and upgrade the income tax scheme for natural persons, among others, through an accounting dividend tax. The report established that there is room to improve the VAT rate, as the current 16% rate is low compared to other countries in the region and OECD country members.