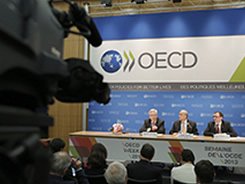 Colombia the most recent country invited to join the OECD

Colombia has moved forward in the process of joining the Organization for Economic Cooperation and Development (OECD), a group formed by 34 countries with transparent economic practices that contribute to global development.

In record time, hard work and two and a half years later, Colombia has become part of this elite group of countries with world recognition given their wholesome economic practices aimed at improving the quality of life of its citizens, an essential goal of the OECD.

"This achievement means that we will further improve our public policies, and we’ll finally be able to measure up against the highest standards. The investors’ confidence in our country will increase even more, resulting in more jobs, competitiveness and better living conditions for all Colombian citizens”, stated President Juan Manuel Santos.

During a press conference held in Paris last Thursday, the OECD’s Secretary General Angel Gurria pointed out that this decision highlights the OECD's commitment to include more members and to strengthen its position as a benchmark organization in the establishment of international standards and best practices.

"Colombia stated that becoming an OECD member will help strengthen its reform and development efforts. The contribution by these countries will enhance our collective experience and will reinforce the role of the Organization as a source of effective, innovative public policies,” highlighted Gurria.

After Colombia adhered to the Organization’s Declaration on International Investment and Transnational Corporations, the country committed to provide foreign investors with preferential treatment and foster a responsible business environment so that all companies based in Colombia will contribute with economic, social, and environmental progress.

"Foreign companies have one more reason to include Colombia in their investment plans, as they will have the certainty to be doing business in a country with transparent economic policies. This achievement complements the recognition granted by The Economist as this year Colombia was included among the six most attractive countries in the world in addition to Colombia's investment grade, which was increased by Standard & Poor’s a few months ago,” declared the President of PROCOLOMBIA, Maria Claudia Lacouture.

In 2012, during a study about “Investment Policies in Colombia”, the OECD pointed out that Colombia had a less restrictive environment to welcome investments than the average of those found in Latin America and the rest of the OECD members.

In addition, the OECD reported that changes in law and policies favored the country’s positioning as an attractive destination to receive foreign capital.
In Colombia, investment as a percentage of the Gross Domestic Product (GDP) has doubled in the last ten years, reaching 26.6% between 2000 and 2011.

During the last few years, the government of Colombia has implemented procedures to recognize and remove unnecessary barriers affecting investment and in some cases some have been identified by the SIFAI (PROCOLOMBIA’s system to facilitate and attract investment.)

“Being accepted as an OECD member is something that makes every Colombian proud. These are great news because not every country can be part of this organization. Only the best are welcomed, and luckily, Colombia is now a member!" stated Santos.