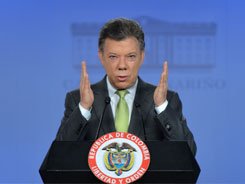 "And we have stepped ahead significantly since then. Today, we have free trade agreements with countries representing nearly 1,500 million consumers who can now get Colombian products exempt from tariffs, including the USA, Europe, and most of Latin America, with free trade agreement negotiations underway with Asia,” he added.

The Head of State pointed out Colombia's achievements during the last three years. “So far, we have become the country with more new jobs created in Latin America. Likewise, our investments are 30% of the Gross Domestic Product, the highest in the region, and currently we are the country with the fastest growing middle class," stated President Santos.

He noted that road, railway and port infrastructure concessions are underway, with an investment over $20 billion USD, which is also an investment opportunity for foreign companies willing to contribute to improved connectivity and competitiveness.

Also, he highlighted the integration process in place between Chile, Peru, Mexico, and Colombia as part of the Pacific Alliance.
“These four countries’ economic health is way above the average in Latin America,” and “this has encouraged us to strengthen the integration efforts between these four countries which, as a group, are stronger and have higher per capita income than Brazil.”