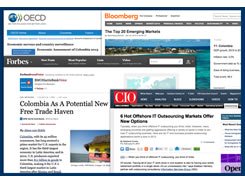 Bloomberg and Forbes highlighted Colombia as an investment focal point

Two of the most important international business media channels and the Organization for Economic Cooperation and Development noted in recent days that Colombia offers advantages over other countries in the region for foreign investment.

In the most recent assessment of the Organization for Economic Cooperation and Development, the OECD highlighted Colombia as the fourth largest economy in Latin America that continues to have short-term solid growth prospects compared with other OECD countries and within the region.

The report submitted by the organization in Bogota also indicated that the Colombian economy is strong, that it maintains favorable long-term prospects highlighting the reforms that have been recently approved are generating confidence among investors.

In addition, Forbes magazine in an article entitled "Colombia as a potential new free trade haven", indicates that although there are still some issues to resolve, "the investment environment in Colombia is much more attractive than other nations of South America because of the opportunities generated with the signed trade agreements and the buoyancy of the economy, " states the study conducted by the publication.

The article highlights the statements of Erich Arispe, one of the directors of Fitch who ascertained "we are seeing a positive outlook, a worthy fiscal management consolidation, a sustained economic growth and inflation under control among other factors."

"Colombia is a better investment environment than many other South American states, because of its open attitude toward trade and commerce and steady growth rate (...)U.S. businesses should not miss out on the momentum the country has built over the last few years ", Forbes argues. This is the full report.

At the same time, in the Top 20 Emerging Markets segment produced by Bloomberg Market magazine, Colombia was ranked at number 11 in the world and the third in Latin America, surpassing Brazil and Mexico. The magazine ranks the 20 markets in view of the ease of doing business, the level of perceived corruption and economic freedom.

The ranking took into account the forecasts that the International Monetary Fund has for 2013 and 2017 in regards to investment, public debt and GDP growth.

In the Global Innovation Index 2012, which ranks 141 countries, Colombia was pegged at notch 65, rising six places in the last year and reaching fourth in the region. It particularly highlights the categories of knowledge and technology, advantages to the business environment, information technology and environmental sustainability, among others.

Colombia continues to escalate positions among the most attractive countries for investment in offshore services. In an article published by The CIO Executive Council, it enumerated Colombia in the prestigious list of the six new options for offshore projects and encouraged others to take notice of the advantages of our country.

The fact that several Indian companies are settled in Colombia, it highlights the attributes that the country has to offer for the establishment of information technology companies. This shows the improvement of workforce credibility and quality in several cities.

The neutral accent of the Spanish language spoken in Colombia remains one of the most attractive factors for information technology companies as they seek to service their customers in Spanish speaking countries.

The trade publication notes that the investments made in Colombia will reap the benefits from lower operating costs and an attractive domestic marketplace.