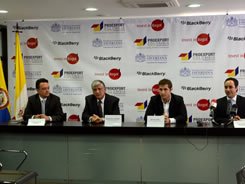 BlackBerry, a world leader in wireless innovation, today opened a BlackBerry Tech Center within the Centro de Tecnología MoviInnova Lab in the School of Engineering at Pontifice Javieriana University in Bogota. BlackBerry worked with PROCOLOMBIA and Invest in Bogota to bring the center to Colombia, which will support students on innovation and application development in mobile computing

The BlackBerry Tech Center is located in the School of Engineering at the Pontifice Javieriana University of Bogota, offering training to students and developers interested in creating mobile apps on cutting-edge platforms, and who want to further their knowledge and opportunities within the mobile computing industry.

PROCOLOMBIA’s president, María Claudia Lacouture stated, “The fact that BlackBerry is opening this technology center in Colombia highlights the potential that this country has for attracting foreign investment in the areas of technology. Among the factors driving Colombia’s success in this field are its qualified human resources and the potential for creating new jobs in competitive sectors, the opportunities to export these services, and to further economic development.”

The Pontifice Javieriana University and BlackBerry have been working together for the past year through the BlackBerry® Academic Program and BlackBerry selected the University as the venue for the technology center initiative because of its high academic level and the quality of its faculty, according to Jorge Luis Sánchez Téllez, Dean of the School of Engineering.

One of the main goals of the BlackBerry Tech Center is to foster innovation and software development among students, with a focus on BlackBerry products and services. Students will be exposed to the mobile computing industry, receive expert advice in identifying business opportunities, and to develop their own entrepreneurial projects.

“The opening of the BlackBerry Tech Center in Colombia reaffirms BlackBerry's commitment to the development of Colombia's ICT-related industries. We aim to reach out to the country’s most talented software developers and invite them to innovate alongside BlackBerry in order to help shape the future of mobile computing,” said Bryan Tafel, Developer Evangelist for Latin America at BlackBerry.

BlackBerry has opened 13 BlackBerry Tech Centers to support mobile computing initiatives with a number of universities across Latin America. The technology center at the Pontifice Javieriana University is a one-of-a-kind laboratory in Colombia. It will also provide software development services to other companies.

Technology is one of the pivotal sectors for Invest in Bogota, the investment promotion office in Bogota which, since 2011, has been conducting a joint effort with BlackBerry to explore new opportunities in Bogota, following the city's academic and research customary practices.

"Today, thanks to the agenda prepared by PROCOLOMBIA and Invest in Bogota, we celebrate the consolidation of this great initiative. Bogota is the country's knowledge hub and one of the most interesting know-how centers in the continent, proving its potential to welcome innovation-oriented operations. This is provided by the Javeriana University, one of the top three institutions in Colombia and one of the top 20 in Latin America according to the QS Ranking," stated Juan Gabriel Perez, Director of Invest in Bogota.

A global leader in wireless innovation, BlackBerry® revolutionized the mobile industry when it was introduced in 1999. Today, BlackBerry aims to inspire the success of our millions of customers around the world by continuously pushing the boundaries of mobile experiences. Founded in 1984 and based in Waterloo, Ontario, BlackBerry operates offices in North America, Europe, Asia Pacific and Latin America. BlackBerry is listed on the NASDAQ Stock Market (NASDAQ: BBRY) and the Toronto Stock Exchange (TSX: BB). For more information, visit www.blackberry.com.

PROCOLOMBIA is the government entity in charge of attracting direct foreign investment, supporting non-mining and non-energy exports, and promoting the country as an international tourism destination.

It offers entrepreneurs comprehensive support and expert advice through its domestic and international branch offices in more than 30 countries worldwide, providing services and means aimed at facilitating the design and implementation of their internationalization strategy in order to create, develop and consolidate business opportunities.

About Invest in Bogota

The investment promotion office in Bogota is a public-private initiative between the Chamber of Commerce of Bogota and the Capital District. Its mission is to support investors seeking opportunities in the Nation’s capital.

The World Bank rated it in 2009 as the best investment office in a developing country. It has a multidisciplinary team with wide expertise in many economic sectors, which allows it to assist potential investors through information and value-added advice.

The Pontifical Xavierian University is a Catholic higher education institute, founded and governed by the Society of Jesus, and committed to the education principles and ideals of its founding body.

The university offers education, research and excellence in service as a university embedded in a multi-cultural country with a global and interdisciplinary perspective. It was also the first university in Colombia with Institutional Registration, which was renewed last year.