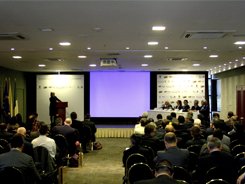 Bogota. Sixty businesspeople from Italian infrastructure, construction, hydrocarbon, renewable energy, telecommunications and capital fund companies, among others, are in Bogota to learn about the potential Colombia has for developing projects and for receiving foreign capital in the country.

From June 3 to 6, the mission, which arrived under the coordination of the Italian Vice Minister of Foreign Affairs, the Colombian Ministry of Trade, Industry and Tourism, The Colombian Embassy in Italy, Unioncamere and PROCOLOMBIA, will meet with delegates from the National Government, trade associations, representatives and economic stakeholders from various sectors in order to learn about the business environment and possibilities that would allow them to establish themselves in the country.

"This is the first time that we receive such a high number of Italian businesspeople, who are not only interested in investing but also in purchasing Colombian products. Sixty businesspeople from medium and large companies have come to find different business alternatives in some of the sectors we have identified as having opportunities such as infrastructure and mining, and others such as telecommunications, service outsourcing, textiles and apparel, hotels, wind and renewable energy," stated María Claudia Lacouture, president of Proexport.

For this mission -explained Lacouture- there are two sectorial showrooms on energy and infrastructure where representatives from the Ministry of Mines and Energy, the National Hydrocarbons Agency, the National Infrastructure Agency and other stakeholders in said industries present the opportunities available to businesspeople in these sectors.

In turn, there will be an opportunity for Colombian and Italian businesspeople to meet one on one to explore various business opportunities.

Marta Dassù, vice minister of Foreign Affairs from Italy, highlighted Colombia's open attitude towards free trade as a key factor for the arrival of Italian capital into the country. She assured that the relations between Italy and Colombia "can become the doorway to stronger trade relations between the Northern and Southern Atlantic, Europe and part of Africa and Colombia as a meeting point between four continents, given that the same values and visions are shared by these countries and we firmly believe in free trade."

Some of the businesspeople on this mission listed the deciding factors for investing in the country. For Cesare Trevisano, from the Trevi group for infrastructure and oil, Colombia's success lies in the human resources capacity, among other things. "The baseline education of the Colombian professional is excellent and given that our affairs are very specialized, Colombian personnel meets the expectations that we require," he stated.

He also highlighted the development potential that Colombia has in other sectors (such as renewable energy), as well as the benefits it offers as an exportation platform for their products and services to countries of the CAN and Mercosur.

For Carlo Vigna, general director of Poligrow Research + Green Oils, a company that grows African palm in the eastern plains and is planning a renewable energy project, "Colombia is one of the most suitable countries for investing in different sectors due to its political stability and the constant support and accompaniment by institutions such as Proexport."

"After four years in the country, our experience has been very good. For our next project, we are exploring the possibility of installing ourselves in a free trade zone, which will allow us to also export opportunities in the countries with which Colombia is developing or has signed an FTA such as the United States and other countries in Europe and the Americas," Vigna added.

According to data from the Bank of the Republic, in 2011, Italy had 15.2 million dollars in investments in Colombia.

In its strategy for capitalizing on the FTAs, PROCOLOMBIA has identified sectors for potential Italian investment in Colombia as an exportation platform to the U.S., Canada, Argentina and Brazil in sectors such as coal, oil and gas, industrial machinery and equipment, textiles, automotive and auto parts, medical devices and electronic components.

Some of the companies that are installed in Colombia are Enel S.P.A., Assicurazioni Generali S.P.A., Pirelli S.P.A, Iveco S.P.A, Alitalia, Plastimac, among others.