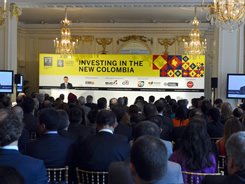 UK Investors learned about the opportunities in Colombia

The Financial Times, the most influential media channel in the United Kingdom noted that while other emerging market economies have fallen, Colombia continues to show signs of growth. " Click here to find the special edition about Colombia."

The transformation process of Colombia was the message in which the President Juan Manuel Santos closed the event. "There, we had the opportunity to explain where the Colombian economy was headed and also the projects destined to attract investment. In regards to what we are doing, there is a great interest to invest in Colombia especially in infrastructure as well as in other areas, not to mention there is a great attentiveness in the Pacific Alliance where they see a great opportunity, " stated Santos.

The president of PROCOLOMBIA, Maria Claudia Lacouture, said that between January 2012 and May 2013, the promotion agency advised and accompanied eight investment projects arising from the UK that would generate 1,048 direct jobs in Bogota, Antioquia and Valle del Cauca. For the European market they have uncovered that Colombia offers an opportunity for capital funds, BPO, IT services, infrastructure, oil and mining goods and services.

Unilever is one of the UK companies that has received the support of PROCOLOMBIA in the settlement and expansion process. The company plans to invest about 40 million euros in a detergent production plant in the Valley – it would be the third of its kind in the country – where they expect to supply not only the domestic market but also export to Venezuela, Ecuador and Central America.

Guillermo de la Torre, director of Corporate Communications and Sustainable Living at Unilever in Colombia said that they believe in the country as a strategic investment destination and they also expect business to continue to grow steadily in the coming years also pointing out that Colombia is a diverse country with multicultural regions and special features in each area of the country.

He added that in a growing economy it is essential to constantly innovate to stay ahead of the pack with products that meet consumer expectations from this European company.

" At this event, it was fantastic to see Colombia’s opportunities. Our company, Atkins worked in engineering and consulting projects for the implementation of the Olympic Games in the UK and we have an interest in working with similar projects in Colombia. In my case, I had the opportunity to work in this country before and have seen the opportunities this nation offers " noted Dennis Crowley, the chief executive of the company that participated in the UK seminar.

According to figures from the Central Bank of Colombia, between 2000 and 2012, the UK was ranked as the second largest source of foreign direct investment in Colombia, which represents about 14.3% of the total acquired by the country with a cumulative investment of USD $ 6.187 Billion.

According to studies by the intelligence unit and analysis from the Financial Times between 2003 and 2012, the arrival of foreign capital from the UK has been mainly directed to the sectors of machinery and industrial equipment, financial services, services business, beverages and others.
"Ever since I have been living in Colombia I have seen a radical change in the country and I can now attest to the true potential of the country in relation to foreign investment. I'm looking to grow my consulting business in this country and at this event I have found available opportunities. I have a special fondness for this country and its people, "said Greg Malpass from the Pell Frischmann Company.