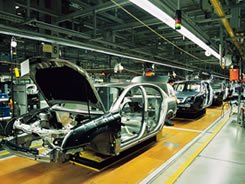 This Wednesday, seminar in Germany on investment potential in the Colombian automotive sector

Berlin, Germany. Around 60 German entrepreneurs attended a seminar on Wednesday in Berlin, intended to showcase the main investment options offered by the Colombian automotive industry.

Among other attendees at the event were the Vice Minister of Corporate Development, Carlos de Hart, as well as other officers from ANDI, ANDEMOS and ASOPARTES, and it was organized by PROCOLOMBIA in alliance with the German Vehicle Association (VDA) and the Corporate Association for Latin America (LAV).

During the event, the opportunities offered by the Colombian automotive industry were on display in segments such as mass transportation development systems and the creation and construction of technological development centers, among others, specific options for companies in that European country interested in making Colombia their next investment destination.

Among the larger automotive brands established in our country are Renault Sofasa, General Motors, Mazda, Busscar, Marcopolo and Mercedes Benz, which in the past month of February launched the first commercial passenger vehicle assembly plant in Bogotá.