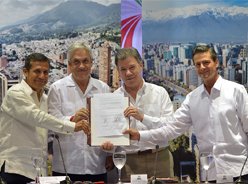 The Pacific Alliance: Regional Driving Force for Prosperity and Growth

This is a trade protocol supplementary to the Pacific Alliance Framework Agreement, which also sets forth that the remaining 8% will be gradually freed from taxes.

One of the main achievements included in the official agreement is the chance to accumulate the origins of goods to foster production integration, rounding off exports to ship value-added products towards Asia.

For Colombia in particular, it is expected that this integration approach will yield an additional growth of 0.7% for the GDP, as well as a foreign investment increase of 1.4% and more than 40,000 new jobs, according to a survey by the National Planning Agency of Colombia.

During the meeting between Sebastian Piñera, president of Chile, Juan Manuel Santos, president of Colombia, Ollanta Humala, president of Peru, and Enrique Peña Nieto, president of Mexico, Finland, India, Israel, Morocco, and Singapore joined the Pacific Alliance as observer countries. These five new countries join a total of 30 nations that follow this integration process very closely, which is now regarded as an international role model.