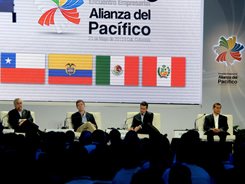 According to PROCOLOMBIA’s President, Maria Claudia Lacouture, one of the business options the Pacific Alliance makes available is a greater investment promotion among the four countries involved and the opportunity to attract projects in the Asia Pacific region.

President Lacouture also pointed out that among the 400 executives participating in the First Business Meeting of the Pacific Alliance some were from the most important companies in Latin America and even from several Fortune 500 companies.

Together with promotion agencies from Chile, Mexico and Peru, PROCOLOMBIA identified entrepreneurs in search of direct foreign investment opportunities to help the allied countries complement the products and services available.

"For South Korean investors, for example, we have leveraged Peru by establishing joint investment between the two countries to profit from this opportunity that this Asian nation brings forth”, stated President Lacouture.

The Pacific Alliance is not only the eight largest world economy, but also the seventh recipient of Foreign Direct Investment (FDI) with 4,286 projects and a 3.2% share in global investments. And from the total identified in the world towards this commercial bloc, 780 projects were received by Colombia, which places the country in second place among the four countries forming the commercial coalition.

One of the relevant factors in the efforts pursued for several months along with promotion agencies is the joint effort to reach the Asian market. The countries in this joint integration area represent 2% of the total Asian investments in the world, which is equivalent to 432 investment projects.
In terms of participation within the bloc, the main FDI beneficiary coming from Asia between 2003 and 2012 is Mexico, with 71.3% of the project share, followed by Colombia with 11.6%, Chile with 9%, and Peru with 8.1%.

According to FDI Markets, during the same period, the main sectors investing in Pacific Alliance countries are software & IT services with 455 projects, BPO with 273 projects, food and tobacco products with 259 projects, communications with 232 projects, and coal, oil, and natural gas with 163 projects. Chile is the main source of FDI in Colombia with 68 projects, mostly in consumer goods, financial services, and software & services sectors.

"We are also seeking to create partnerships and productive connections among entrepreneurs. A Chilean company producing cotton or raw materials in the textile field can form an alliance or investment project with a Colombian manufacturer and in turn they can sell their products to Korea, as this country buys 6.5 million USD in textiles and apparel", explained the President of Proexport.

On the other hand, Mexico has 21 investment projects in Colombia, mainly in the communications, leisure, entertainment, software & IT services sectors. The main investment sectors from Peru include the textile, foods and tobacco, and plastic industries.

"This Alliance, that we wished for in 2010, is now a positive reality with results we have begun to notice through greater opportunities and positive outlooks in terms of commerce, investment, and people and capital flow not only among our member countries, but before the rest of the world", highlighted President Juan Manuel Santos, during the Pacific Alliance Summit held on May 22nd and 23rd in Cali, Colombia.