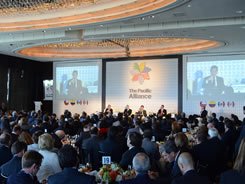 Bogota, November 8. (Pxp) - More than 2,720 entrepreneurs and investors from 13 countries on four continents have expressed interest in doing business with members of the Pacific Alliance, which has been considered by the Inter-American Development Bank as "the most ambitious integration proposal in decades".

This figure portrays the number of international entrepreneurs who, in search of business opportunities in a market of about 210 million consumers, have attended the activities organized by the four countries of the Alliance, whose Pro Tempore Presidency has been held by Colombia since last May.

From the time Colombia assumed the Pro Tempore Presidency in the Alliance Summit held in Cali, 18 activities have been carried out around the world. Included among these activities are two major business summits as well as a business matchmaking forum, a joint participation in two agribusiness international trade shows and 13 investment opportunities seminars.

"To the extent regional forces can be organized, investors are summoned, interest is fostered and stability is ensured, not only in one country but in a region as well, and the Pacific Alliance is a regional organization that really works", said the former Prime Minister of France, Dominique de Villepin a few days ago.

One of the highlights and the activity with the most representation on the part of Colombian entrepreneurs was the business matchmaking forum, which supported by the Inter-American Development Bank (IDB), was held last June 19 and 20 in Cali gathering 722 entrepreneurs, of which 486 were exporters, distributed as follows: 42% Colombian, 24% Chilean, 21% Mexican and 14% Peruvian, who in total had 3,800 business appointments with 236 buyers.

The business expectations derived from this event amounted to about $116 million USD, thus exceeding the initially planned goal of $80 million USD. The sector that recorded the highest expectations was the food sector (53%), followed by manufacturing (25%), apparel (13.8%) and services (7.1%).

"There is no doubt that this process will encourage other countries to join the Pacific Alliance, which declares to be "open" to partners willing to accept the same level of competition and ambition," said IDB President Luis Alberto Moreno last May.

The business summits have also allowed entrepreneurs to become acquainted with the research, such as the one headed by the IDB and the promotion agencies, regarding possible production chains for promoting intraregional trade and opportunities in third-party markets.

In this respect, one of the best examples is the pineapple. Colombia can sell this product to Chile and, in turn, Chile can extract pineapple juice and export it to China, a country with whom Chile has a Free Trade Agreement and which in 2012 imported nearly $13.8 million USD of this product, according to Trademap indicators.

Furthermore, PROCOLOMBIA has identified approximately 500 opportunities for agribusiness products, manufacturing, apparel and services with potential for increased trade in Colombia and with the other partners in this initiative, focusing on Asia Pacific and Europe as well.

According to figures from the Ministry of Trade, Industry and Tourism of Colombia, the four members of the Pacific Alliance represent 50% of the trade in the region with exports of $556 billion USD and imports of $560 billion USD in 2012, which, according to Moreno, if the partners were a nation "today it would be the ninth largest economy in the world."

The potential that the Pacific Alliance has to attract investment was reflected in the Business Forum that was held in September in New York, involving 356 U.S. entrepreneurs who listened to speeches of the Heads of State of Chile, Peru and Colombia and the Mexican Secretary of Economy, regarding opportunities offered by the region which accounts for 26% of the foreign direct investment flows to Latin America.

A business summit of similar proportions had been held in Cali last May as part of the seventh Presidential Summit, with the attendance of 334 entrepreneurs from 14 different countries. For this occasion, Colombia led the summit with 221 representatives, followed by Mexico with 35, Chile with 17, Spain with 15 and Peru with 12.

Besides the foregoing, the promotion agencies of Chile, Colombia, Mexico and Peru work together to identify investment opportunities and through the same to create value chains among the four countries to complement the exportable products.

In a joint effort with Peru, PROCOLOMBIA has also endeavored to attract South Korean businessmen and secure permanent presence in the region. It has also uncovered Chile’s opportunities for investment or to establish strategic alliances with Colombian textile companies in order to export apparel to South Korea.

Overall, according to the Ministry of Trade, Industry and Tourism, the Gross Domestic Product (GDP) represents 35% of the total for Latin America and the Caribbean, with an average growth rate of 4.8% in 2012, higher than the global projection of 3.2%, which are some of the aspects presented in the activities carried out in 9 countries throughout North America, Europe and Asia.

On the Same Path

One of the cornerstones of the Pacific Alliance's integration strategy is the free movement of people in the region, something that will strengthen tourism within the block. A Cooperation Agreement was signed in this context, aimed at strengthening and developing cooperative relations based on the design of initiatives that seek to increase tourism among member countries, with emphasis on nature and adventure tourism, sports tourism, sun and beach tourism, cultural tourism and tourism organized for groups, as well as event and convention tourism.

Furthermore, as part of the Pacific Alliance's cooperation agreement on tourism, joint activities and projects have been proposed among the authorities of the four countries responsible for this matter, with an aim to encourage tourism attraction and to create packages and routes for international travelers.

International TV chains have already begun to air the commercial for promoting intraregional tourism by attracting tourists from around the world to visit the wonders of the region, such as the pyramids of Mexico, Machu Pichu in Peru, the Atacama Desert in Chile and the Coffee Cultural Landscape, as well as the diversity of the gastronomy and other attractions. The link for this commercial is the following: https://www.youtube.com/watch?v=WJNOC4UdGfs

Similarly, ProChile, ProMexico, PromPeru and PROCOLOMBIA have developed a plan to open joint offices abroad, which began in Istanbul (Turkey).

With a Full Schedule

Pacific Alliance, in its quest to contribute to regional integration and foster innovation and entrepreneurship in member countries, has planned within its next activities the implementation of Lab4, which is organized by the promotion agencies of each country and the Inter-American Development Bank (IDB).

This event, which will take place between December 4 and 6 in the city of Santiago, Chile, will include the participation of government officials, private entities, universities, venture capital organizations, a group of 15 entrepreneurs from each country and public agencies for innovation and entrepreneurship.

This space will help define a common roadmap among the four countries for the development of tools that promote innovation and entrepreneurship in the public and private sectors.