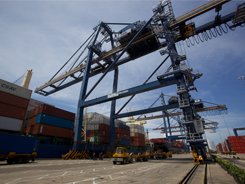 Seminars have begun in the U.S. and Canada to attract investment in free trade zones

Bogota. In order to learn about the benefits and opportunities offered by the free trade zones and regions in Colombia for establishing foreign companies in the country, almost 60 North American investors from diverse sectors will attend three seminars that PROCOLOMBIA has scheduled in the cities of Miami, Chicago (United States) and Toronto (Canada), on May 25, 31 and 29, respectively.

These activities will present a general overview for entrepreneurs, on the free trade zone regime of Colombia, and will promote the benefits of investing in them given the advantages provided by the free trade agreements in effect with Canada and the United States, the latter coming into effect last May 15.

The first of these meetings takes place this May 25 at the Hotel Intercontinental at Doral, in Miami. Representatives from the various regional investment promotion agencies will participate, holding one-on-one meetings with the participants in order to offer and explore new business opportunities.

The second and third meetings will be scheduled in Toronto on May 29, at the Hyatt Avenue Road, and in Chicago on May 31, at the Hotel Doubletree O'Hare. Twenty investors are expected to participate in each seminar.

The free trade zones in Colombia have a competitive legal framework and offer benefits to foreign investors, among which is an income tax rate of 15%, sales to the local market without restrictions, and a tax exemption on imports and VAT.

Also, there are approximately four million square meters available for foreign companies that wish to establish themselves in the permanent free trade zones located in the departments of Atlantico, Bolivar, Guajira, Magdalena, Cundinamarca, Boyaca, Santander, Antioquia, Risaralda, Caldas, Quindio, Valle del Cauca, Huila, Cauca and Norte de Santander, which offer a wide variety of characteristics that make them competitive and give them a high added value for foreign investment.

In its strategy for attracting Direct Foreign Investment (DFI), PROCOLOMBIA has identified some sectors with opportunities for the arrival of Canadian and U.S. capital to the country.

In the case of the United States, there are several opportunities that are opening up with the FTA coming into effect. One is to see Colombia as an export platform into other Latin American, European and Asian countries that do not have trade agreements with that country. For this scenario, sectors such as the automotive, food and tobacco stand out.

Other sectors with potential for the arrival of U.S. investments are telecommunications, construction materials, agro-industry, mining and textiles, among others.

Some of the U.S. companies that are established in Colombia are Kimberly Clark, Hewlett Packard, Golden Gate Capital, Hilton, Lender Systems, Intellitech, Whyndham Hotels, among others.

Also, for Canada (which had an investment flow into Colombia of USD$173.8 million in 2011), the sectors with the highest potential are financial services, software and IT services, BPO, agro-industry and oil and gas goods and services. Among the Canadian companies that are established in the country are Scotiabank, Pacific Rubiales, McCain and Synergex, among others.