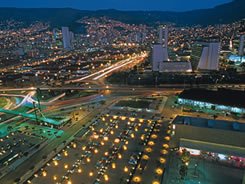 This is the result of the international promotion of Colombia as destination for direct foreign investment in sectors other than Mine and Energy, which also generated 329 opportunities in 14 provinces.

Furthermore, investors from 23 countries attended 130 promotion seminars. "Those activities are aimed at presenting the different advantages offered by Colombia as investment destination. These opportunities include promoting Colombia as exporting platform to third markets, where free trade agreements are in place, the benefits of duty-free zones, the incentives and strengths of non-mining-power sectors of added value, such as tourism and hotel infrastructure, BPO, capital funds, cosmetics, textiles, apparel, software and IT services and construction materials, among others", affirmed the president of PROCOLOMBIA, María Claudia Lacouture.

Among the foreign companies that have arrived to the country, thanks to the work undertaken by PROCOLOMBIA, we may mention Capgemini, INDRA and DyT Systems in the software and service sector, Prebuild in the construction sector, Cityexpress and Pestana in the tourism infrastructure and hotel sector; as well as the reinvestment of Unilever and Hewlett Packard.

"The investments these companies make constitute a vote of trust in Colombia and a signal for all investors", indicated Lacouture, who highlighted the joint work made with regional investment promotion agencies.

PROCOLOMBIA's IED promotion work also includes the Productive Transformation Program sectors, for which the entity held 50 events, coordinated 112 visits of foreign companies to the country and supported investments for more than US$500 million.

Likewise, 87 visits of investors from 21 investors have been coordinated, which include 13 from the United States, 22 from Spain, 6 from Canada, 4 from Mexico and 5 from Brazil, among others.

"Colombia offers different appeals for foreign investment and FTAs are one of them. We often export to the United States and Canada and we want to transfer part of that production of Portugal to the American market through Colombia", Pedro Vargas, CEO of Prebuild in Colombia.

"Colombia is a key country in our strategy to expand in the region; it is continuously growing and offers skilled labor at very competitive costs. This is why we decided to open a branch here", Peter Kroll, Senior Vice president Capgemini North Latin America.

"Colombia is a treasure expecting to be discovered. Significant work is being carried out to promote a different country that is economically and politically sound, with potential in every business area. The economic perspectives, competitive and trained labor, among other factors, give us the certainty that the project will succeed", Luis Araujo, Vice President of Grupo Pestana for Latin America.

"The country has a series of favorable conditions for brand growth, above other countries in the region, which include market size and Colombian economy strengthening, which has demonstrated stability compared to other markets, thus consolidating Colombia as the most appealing option", Luis Barrios, Director General, City Express Hotels in Mexico.