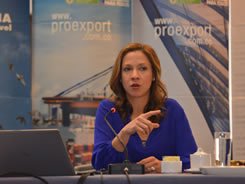 PROCOLOMBIA: Foreign Investors Estimate 63,103 New Jobs in Sectors Other Than Mining and Oil

Bogota, Dec. 17th (Pxp) – Between August 2010 and October 2013, PROCOLOMBIA has endeavored to start 239 new businesses with foreign capital that translate into $6.6 billion USD worth of investments. Although 7,846 new jobs were reported in 2010 across 11 departments, the expectations of all three years exceed 63,103 new jobs estimated across 20 regions.

Among all projects, 128 come from investment services for $2.3 billion USD, which will create 77.3% of the total jobs in areas such as tourism infrastructure, investment funds, retail, engineering and construction services, insurance and financial services, business process outsourcing, telecommunications, electric power and its related goods and services, software and information technologies, hotel infrastructure, logistics, real estate, health, and audiovisual services.

In second place, $3.9 billion USD will be allocated to 94 projects in manufacturing areas in existence since 2010 in the country, corresponding to 18% of new jobs focused on the metalworking and steel, construction materials, cosmetics and toiletries, auto-parts and vehicle industry, instruments and devices, pharmaceutical, chemicals, plastic and rubber, household products, office, hotel, hospital and industrial, fashion, furniture and wood sectors.

In third place, there are 9 projects for oil goods and services representing 3% of new jobs, which will add value to the production line and the supply chain. Reported investment commitments amount to $340 million USD.

In fourth place, 8 investments in agriculture represent 2% of total jobs, spread across subsectors like palm, oil, vegetable fats and biofuels, woodlands, fruits and vegetable produce, dairy, cereals, grains and their derivatives, and agrochemicals. The estimated investment amount is $140 million USD.

Actually, of all the new projects arriving since 2010 to date, 31% belong to the Productive Transformation Program (PTP), with a committed amount of $1.79 billion USD, that is, 27% of the total, and is expected to create 22,974 new jobs.

Development for the Whole Country

A total of 20 departments, -62% of the national territory-, have been chosen by international companies to consolidate opportunities in line with PROCOLOMBIA's strategy to spread the benefits of new capitals throughout more destinations.

According to fDi Markets data for the last three years, the city of Bogota leads the foreign resource entry indicator with 32%, followed by Atlantico with 10%, Antioquia with 6%, Valle del Cauca with 4%, Bolivar with 3%, Cundinamarca and Santander with 2% each, Magdalena with 1%, and 40% spread among others.

Colombia Remains on the Investors' Radars

Between August 2010 and October 2013, 199 investors from 27 countries supported by PROCOLOMBIA chose the country as a destination to engage in business, and the following 14 countries invested in Colombia for the first time: Germany, Portugal, France, Puerto Rico, Switzerland, South Korea, United Arab Emirates, Israel, Japan, New Zealand, Belgium, Czech Republic, Singapore, and Guatemala.
The group is rounded by countries that are a regular resource supplier into Colombia: United States, Spain, Canada, United Kingdom, Chile, India, Argentina, Brazil, China, and Mexico, among others.

During the last three years, PROCOLOMBIA has identified 1,393 new investment opportunities from 1,199 potential investors in 57 countries, 17 of which are new markets and 61 include sectors with high job creation potential. In addition, 392 seminars have been held in 39 countries.

According to the Central Bank of Colombia, investment in non-mining, non-energy fields accrued for the last three years amounts to 19.4 billion USD, mainly in the manufacturing, transportation, storage and communications, trade, restaurants and hotels sectors.

Some success stories of transnational corporations supported by PROCOLOMBIA to consolidate business opportunities in the country include: Furukawa from Japan, which is building in Palmira the first and only fiber optic cable manufacturing plant; Portugal's Prebuild, a construction materials plant in Cundinamarca; new hotels in Cali from Mexico's City Express chain; the expansion of Intercontinental Hotels in Cucuta, Bucaramanga, Cartagena, and Barranquilla, among others; the arrival of service transnationals such as AIG from United States, BlackBerry from Canada, Arvato and Indra from Spain, Genpact from India, the new Jeronimo Martins supermarkets in the Coffee Cultural Landscape and Valle del Cauca, among others.

Success stories of foreign companies that have arrived in the country with the support of PROCOLOMBIA: