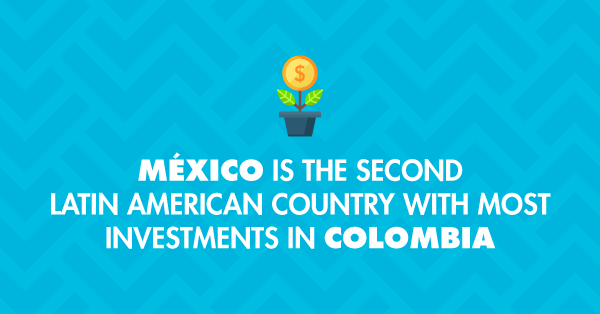 Mexico: A country that make investments in Colombia

According to the Banco de la República Balance of Payments, investments made by Mexican companies in Colombia recorded a cumulative amount of USD$4.5bn between the year 2000 and the first quarter of 2017, making the Aztec investor the world's eleventh largest investor in Colombia.

This relationship has grown over the years and, according to PROCOLOMBIA reports based on FDI Market calculations, has strengthened with the arrival of around 55 Mexican firms operating directly in the country. Among these international companies making investments in Colombia are, for example, companies such as CEMEX, the Bimbo Group, Azteca TV, the Salinas Group, Telmex, Aeroméxico, Interjet and FEMSA.

(You may wish to read: How to set up your business in Colombia)

Where can I invest in Colombia?

More than 30 of the total number of companies of Mexican origin in Colombia are based in Bogotá, although it is expected that companies intending to invest in Colombia will arrive in other cities across the country too.

That's why PROCOLOMBIA accompanied at least 18 investment in Colombia projects with Mexican capital between the years 2010 and 2016. These projects generated business in Colombia worth USD$955m in sectors such as BPO, hotel infrastructure, construction materials, metalworking, telecommunications and the automotive industry, which in turn generated close to 7,000 jobs in the country. (Find out here how you can invest in Colombia in the services sector)

If you are looking for ways to invest in Colombia, PROCOLOMBIA has identified opportunities for Aztec entrepreneurs in sectors such as infrastructure and road development, construction materials, BPO services, shared services, information technology, application development, agribusiness, logistics and port development, cacao production and the processing of fruits, vegetables, meats and cereals.

Colombia's automotive industry is a prime example. Colombia is noted for the manufacture of automotive parts, electrical components and engine parts. According to BBVA Research, the annual production of auto parts in Colombia is equivalent to more than one billion US dollars and, of this total, about 47% is aimed at exporting Colombian products.

When it comes to the production of industrial machinery, Mexican or global entrepreneurs will find investment opportunities in Colombia in this sector, particularly in industrial machinery for agriculture, mining and construction, as well as machinery for the transmission of energy. At present, the production of special-purpose machinery in Colombia is not sufficient when compared to the needs of the local market. Just 17.7% of domestic consumption is currently satisfied and imports represent 87% of the domestic demand.

That's why, according to ANDI reports, Colombia has high potential for receiving Foreign Direct Investment (FDI in Colombia) in industrial machinery.

(Want to know how to import machinery in Colombia? Find out here)

There are also business opportunities between Colombia and Mexico that will foster productive and strategic links within the framework of the Pacific Alliance. Colombia is excelling in the production of foods such as fried foods (snacks), cookies, jams, preserves and other processed foods. Bear in mind that Colombia, because of its agro-industrial vocation and rich biodivesity, can provide organic and environmentally-friendly products.

Advantages of the Pacific Alliance for investors in Colombia

The Pacific Alliance, which includes Colombia and Mexico, is a platform for economic, trade and global integration with a special emphasis on the Asia Pacific region. It's an initiative that promotes growth, development and competitiveness between the different countries (Colombia, Mexico, Chile and Peru) and at the same time expands trade relations with new regions.

The Pacific Alliance has been able to position itself strongly in just five years, representing a market of more than 225 million people, accounting for 55% of Latin America's foreign trade and constituting 44% of total foreign direct investment flows in the region.

The Trade Protocol, in force since May 1, 2016, immediately liberated 92% of inter-regional trade tariffs, which has led to greater investments in Colombia from countries in the alliance, such as Mexico. The Pacific Alliance has also initiated the phase-out process of the remaining 8% of tariffs and is facilitating the accumulation of origin.

With different agreements, more and more investors are arriving in Colombia. If you would like more information, remember PROCOLOMBIA has, at your disposal, a portfolio of investor services and we will accompany you every step of the way as you begin or increase your business in Colombia.