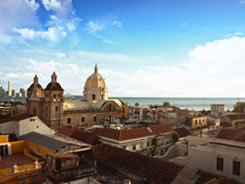 According to the article, Colombia has laid out a strong public investment program for housing and infrastructure, and is developing a new raw materials sector. Colombia is considered a special case in the Americas due to its business-friendly conditions and achievements in resolving its internecine strife, which will benefit both nationals and foreigners in equal measure.

The South American country also has one of the most thriving economies in the region, and the article claims that Colombia has strengthened its economic relationship with Spain in the last few months.

The newspaper points at the opportunities and advantages available in Colombia for Spanish entrepreneurs, like the great chance to establish business relationships with the USA and Canada through Colombia. This entails a major competitive advantage regarding access to the American market for companies in sectors like ceramics, as they currently work under costly customs tariffs to export their products towards North American countries.

According to the newspaper, Colombia stands above others due to the growth of its domestic GDP compared to South American countries like Brazil, underlining the economic challenges the country has faced to become one of the most promising economies in Latin America.

The article ends by highlighting the trust that the World Bank has in the development of Colombian economy, driven by the constant flow of FDI and large projects.