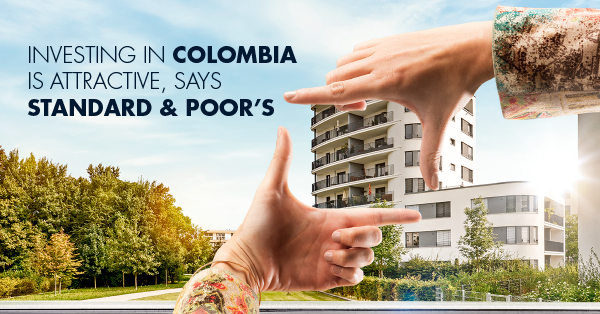 Investing in Colombia is attractive and stable

Colombia is attractive and stable for investment, says rating agency

Investing in Colombia is a stable and positive option for investors, according to a global ratings agency that has praised the country's outlook for the future.

Standard & Poor's said the success of Colombian exports, the stability of the Colombian economy and increased Colombian security following the peace agreement are just some of the reasons why investing in Colombia continues to attract international investors.

Manuel Orozco, S&P Global Ratings' sovereign and public finance team associate, called 2018 'a year of adjustments' for Colombia, during which the country was expected to maintain its solid economic performance, reduce its fiscal deficit, continue to achieve export success and reap the benefits of its peace agreement.

He said: "Colombia has consolidated political institutions that provide important support for its stability. We hope the results of the 2018 elections will reinforce this and continue the country on its development path.

"It's worth noting the important improvements in Colombian security during the last decade that have driven greater investment and growth."

Colombia's stable condition is the reason why it has a positive outlook when it comes to managing the current low price of raw materials, which has impacted several economies in the region.

The ratings agency praised the opportunities for investing in Colombia in the aftermath of the country's peace agreement. They highlighted plans for the expansion of Colombian infrastructure, such as 4G highways and the modernization of ports and airports, which will make the country even more competitive and boost the prospects for short and medium term economic growth.

Standard & Poor's Global Ratings has declared Colombia's investment grade as BBB- with a stable outlook. When a ratings agency says an issuer's debt has a 'stable outlook', it means it expects the country's institutions and history of pro-growth economic policies to contribute to its economic continuity and stability.

Colombia's rating could rise if Colombian exports continue to perform successfully and its net external debt is below 100%, the agency said, which would be further proof of the strength of the Colombian economy.

Standard & Poor's is not the only ratings agency to have praised Colombia and declared investing in Colombia an attractive option for international investors.

Fitch Ratings said that it expects a good economic performance for Colombia and that the country will retain a BBB rating with a stable outlook, according to its most recent outlook report.

In terms of the Colombian economy, the agency said the country's GDP has stabilized, growth is improving and external debt and inflation continues to fall. Colombia's net external debt is expected to fall from 47.7% of GDP to 42.8% while the current account deficit will fall from 3.8% to 3.5%.

The role of PROCOLOMBIA

PROCOLOMBIA has witnessed the increasing arrival of foreign capital to Colombia with projects that contribute to the country's competitiveness, development and the generation of jobs. Colombia is one of the world's 30 largest recipients of international investment, according to UNCTAD.

PROCOLOMBIA president Felipe Jaramillo said: "We facilitated the arrival of 138 new foreign direct investment projects in 2017, a 15.9% increase compared to the previous year in segments such as agro-industry, innovation, IT and development services, hotel and tourism infrastructure and civil infrastructure.

"These are just one more example of the investor confidence that the world's entrepreneurs place in Colombia."

PROCOLOMBIA works alongside international investors and Colombian exporters, to drive the Colombian economy. If you wish to learn more, explore PROCOLOMBIA's map of investment opportunities in Colombia and discover the events it has scheduled throughout the year.