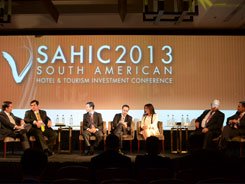 International Investors Back Hotels across All Regions in Colombia

Camilo Bolaños, Vice President of Development & Real State in Latin America at Hyatt, stated that Colombia “has human talent as skilled as in other countries, combining service and hospitality.”

He added that Colombia “enjoys strong advantages that support ongoing investments: Above average growth, business-friendly environment, and the work conducted by PROCOLOMBIA is the best in South America.”

Another key speaker at SAHIC was Roberto Palacios, CFO at City Express Hotels in Mexico, who underscored that Bogota is the second most important capital city regarding new hotel projects. Regarding future projects, he claimed that his company will be opening a hotel in Cali, and they are currently studying opportunities in Medellin and other cities where they are already open for business.

The 6th annual SAHIC took place in Bogota, being the second time Colombia hosts the event that gathers the top hotel investment leaders. The first time was back in 2010 in Cartagena.