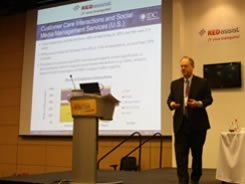 "Colombia has already gained worldwide reputation in services outsourcing, especially around the implementation of call centers and data centers, making it a strong and competitive market for foreign investment in the sector", assured Henry Morris, Vice President of Investigation and Services from the company IDC.

During his participation at the I International Business Process Colombia Congress 2012, arranged by the Americas Hall and supported by PROCOLOMBIA, Morris stated that among the country's main features that make nearshore project implementation propitious in Colombia, are its geographical location, "providing U.S. companies with added value, as they share almost the same time zone and its business activity adapts to the same time frames as the U.S. population's daily activities."

Morris is an expert in software development applications, having attended the universities of Michigan and Pennsylvania. He has been a Professor at Northeastern University and Bentley College, and is a frequent cooperator in specialized publications like the DM Review, Computerworld, KMworld and Software Magazine.

Furthermore, the added that "the implementation of the Free Trade Agreement with the United States, and the presence of important leaders of that nation in Colombia, has opened the doors for new buyers who had never before included the country among their expansion plans to see that this is a strategic market."

Services outsourcing in Colombia is one of the sectors with the highest investment potential, and it is promoted by PROCOLOMBIA around the world. In 2010 and 2011, the research and consulting firm Gartner, included Colombia in the "Top 30 locations for Offshoring" report. This publication is prepared annually by BPO specialists from this company, who agree on the country's potential in this sector worldwide.

The congress held in Bogotá was attended by 250 entrepreneurs, including buyers and users of outsourced services in the country. During the event, PROCOLOMBIA presented the strengths in the sector and the main foreign investment opportunities for service outsourcing and information technologies in the country.

Among the BPO and IT companies present in Colombia are well known brands names like Hewlett Packard, Direct TV, and Citigroup, Genpact, Synapsis, Unisono, Indra, Unisys and IBM.