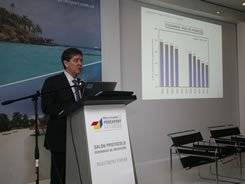 Foreign investors see the potential in Colombia to become an export platform and increase the middle class.

During the High Ranking Forum to attract investment, Fabricio Ponce, the President of Coca Cola Femsa, stated that since 2003 Colombia has been one of the largest bets for the company. This has helped the enterprise move forward with the construction of the most modern plant in Latin America because they have seen the potential of the domestic economy.

“Today, Coca Cola Femsa is building two plants globally and one of them is located in Colombia.  This has been a reality as a result of the statutory stability that has led us to make investment growth plays, in addition to the substantial improvements in public security, which has enabled us to increase coverage in the country, rising from 60% to 99%” stated the entrepreneur.

Meanwhile Guillermo De La Torre, Director of Corporate Affairs and Communications at Unilever Middle Americas added that the development of the company in Valle del Cauca has been possible due to the stability in all fronts. This will enable them to export 30% out its new detergents plant, which among many things, it is also considered the most prevailing in the region.

Colombia’s privileged access to more than 1.5 billion consumers and to more than 13 current Free Trade Agreements represents an opportunity to entrepreneurs like Sofasa Renault. They are betting that its current operation in Colombia will become an export platform for the region.

“Currently 46% of the assembly’s production output that is manufactured in Envigado - in the Department of Antioquia - is exported to Mexico, which represents a highly competitive sector for the automotive sector. In addition, units are sent to Argentina, Chile, Ecuador, Peru, Central America and the Caribbean. In the last 4 years, we have invested $56 M Euros for the plant’s maintenance and the assembly line,” stated Pablo Urrego, General Manager of Sofasa Renault.

The entrepreneur indicated that the innovation and development capacity is an export trademark for the automotive company because many of the process improvement initiatives are been replicated in other countries.

During the forum, the president of the National Association of Industrialists of Colombia (sociacion Nacional de Empresarios de Colombia, ANDI), Bruce Mac Master, presented the private sector’s forecast figures highlighting the increasing consumption capacity of the middle class. These projections show that consumption in this economic bracket will multiply sixfold in years to come.

ANDI also pointed out that in 2000, close to 16% of the population belonged to the middle class. Today this figure is close to 27% and it is forecasted to reach 40%, which is also believed to have a correlation to the decline in the poverty index over the last decade when it shrunk from 50% to 34.4%. “ This will translate into a larger group of people that have purchasing power becoming a competitive advantage for foreign companies that are contemplating to invest and to establish in Colombia”, said Mac Master.>

The Vice President of the National Bureau of Infrastructure, Javier Hernandez, stated that the investments of $47 billion earmarked for the fourth generation of concessions will allow travel time savings of 30% in the midsection of the country and ports.

The investment forum welcomed 26 foreign companies convened by Proexport. They will be touring several Colombian cities to analyze the potential of the manufacturing sector.