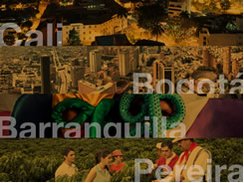 Bogota. Four Colombian cities achieved important positions in the 2013 - 2014 ranking by the Financial Times' Intelligence Unit. This group selects the cities with the most promising prospects in this field from a group of 127 applicants.

The Colombian economy has some of the most dynamic growth at an international level because it has the third most direct foreign investment in the region. Publications such as "The Economist" included it among the top 10 countries that will drive the most growth globally. This will be seen in the promotion of the diversity, offer and competitive advantage of the country's cities, which offer benefits to the companies that believe and invest," assured the President of PROCOLOMBIA, Maria Claudia Lacouture.

In the international ranking that evaluated cities with a medium-sized economy, Pereira is the only one in South America included in the top ten.
"Only a month ago, we witnessed the arrival of Jeronimo Martins in this region. They saw an enormous potential in the capital of Risaralda. They were certain of the viability of their project in Colombia due to its stable economy, open market with serious institutions and clear rules of the game," the President of PROCOLOMBIA added.

In the general ranking, Bogota was fifth. The publication highlighted its continuous progress since 2008, which also afforded it outstanding positions in the top 10 cities with economic potential, and "most business friendly" categories.

The Intelligence Unit of the Financial Times highlighted that the Colombian capital is one of the economies that has received the best FDI indexes among the countries of North and South America. It also added that taking advantage of the opportunities the signing of the FTA with the United States offers for their commercial and business relations is the new objective of Colombian cities.

PROCOLOMBIA, in collaboration with Invest in Bogota, identified that the region offers opportunities for international projects focused on hotel and tourism infrastructure, the automotive sector, outsourcing of services, cosmetics and toiletries, agribusiness, and software and IT services.

In 2012, the two promotion agencies supported 26 projects in Bogota, which will earmark USD1.251 billion and will represent 6,480 new jobs in sectors such as capital funds, hotel infrastructure, automotive, information technology, BPO, telecommunications and retail, etc.

Moreover, Barranquilla and Cali ranked among the cities with the best investment strategy, occupying positions 8 and 10 respectively.

We work with ProBarranquilla and Invest Pacific. In the past year, we organized business meetings in Barranquilla and Cali for 26 potential investors from the United States, Portugal, Puerto Rico, India, Argentina and Mexico, with special interest in projects focused on BPO, construction materials, hotel infrastructure, metalworking, dairy products and capital funds," Lacouture indicated.

In 2012, with the support of the organization, six new international projects were reported in these two cities. These represent investments of USD 498 million and which could directly generate 4,346 jobs.

We are certain of the potential of Barranquilla, Cali, Pasto and Huila. With our business model for developing accounting software to transition to international regulations, we have plans to expand in these cities, thus adding leverage to operations and meeting our goal for Bogota to be the main hub for Latin America and the Caribbean. Our objective is that 60% of the company's income will be represented by these Colombian cities in 2015," stated Claudio Pezoa, Manager of the Chilean company D&T Systems, which PROCOLOMBIA assisted throughout its process of entering Colombia.