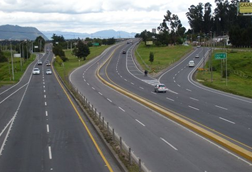 In a recent article published in the UK written by the Financial Times, highlighted the plans the Colombian government has to transform the country's road infrastructure describing it as the most ambitious project in the country’s history.

The initial program has an estimated investment of over US $ 25 billion, comprising 40 mega road projects which are part of a larger project worth US $ 50 billion that further seeks to improve the country’s infrastructure that include railway, the navigability of the Magdalena River - the main tributary of the country, modernization of ports and the expansion of Bogota’s airport.

The Financial Times highlights Colombia’s momentum, its business climate and political stability, which make projects like this possible. According to the article, the government's goal is to build 4,350 miles of roads in the next five years and reduce travel times by 30% and freight by 20%.

According to Luis Fernando Andrade, the president of the National Infrastructure Agency of Colombia - ANI, stated that proposals from large companies and global corporations interested in participating in projects that will improve the connectivity and development of the country have been submitted.

Twenty-three international consortia have pre-qualified to bid. It is estimated that the rate of return for investors will be approximately 15% estimated in US dollars.