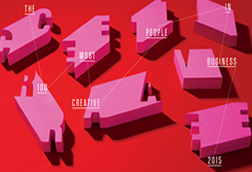 Fast Company called the president of ProColombia the fourth most creative person in business.

A list by Fast Company titled “The 100 Most Creative People in Business”, released annually since 2009, has placed ProColombia’s President María Claudia Lacouture in fourth place, recognized by the efforts to rebrand Colombia.

As the publication states, Lacouture and her organization’s strategy managed to place the country on the map.
According to Fast Company’s criteria, under Lacouture’s administration the organization improved Colombia’s reputation, positioning it as a safe and popular tourist destination.
The magazine highlights Colombia’s strides as a center for technology and investment.

The article also features the fact that some important multinational companies have a presence in the country, such as IBM in Bogota and HP in Medellin. “The country’s information technology sector is now the third largest in Latin America, and is expected to double in the next three years,” concluded the review.

María Claudia Lacouture, ProColombia’s President since 2010, is the only Latin American leader on the list for 2015, and is the only participant from an official promotional organization.

Under Lacouture’s management, 246 investors from 30 countries chose to invest in Colombia, with prospects for generating 118,442 jobs in 42 sectors between 2010 and 2014.