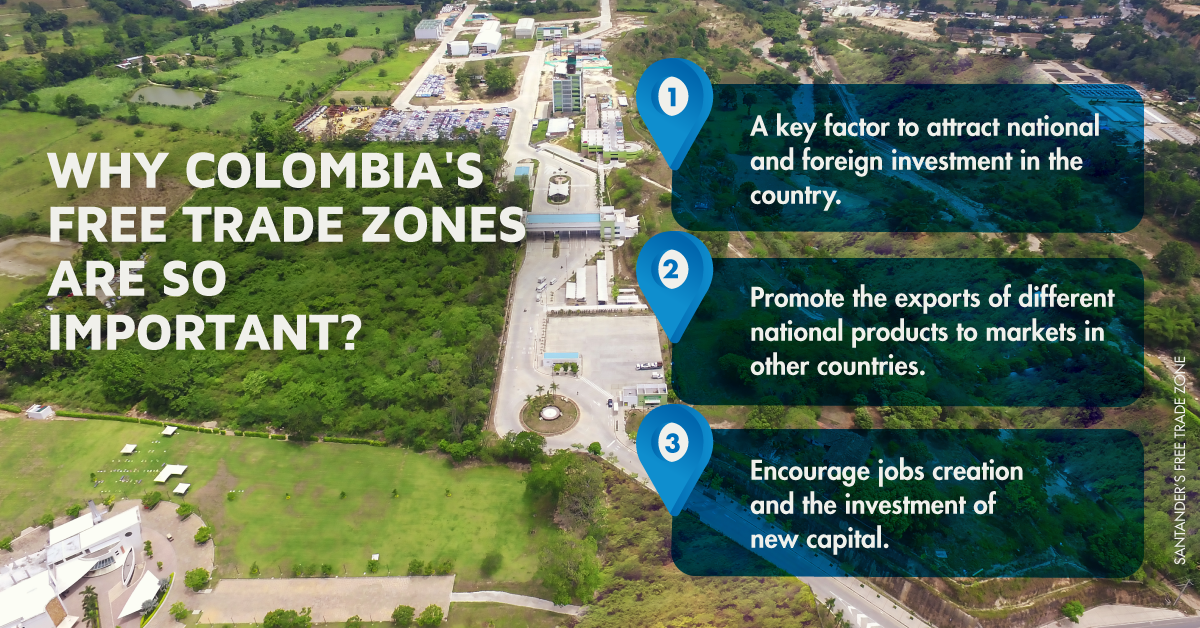 Do you know why Colombia’s free trade zones are so important?

Free trade zones are those zones in which taxes, tariffs, customs, financial or regulatory advantages are offered to companies that establish themselves within them, in order to carry out their activities. In Colombia, thanks to the special location free trade zones are indispensable to attract foreign investment as well as to promote the exportation of different national products to markets in other countries.

According to studies carried out by the World Bank, countries such as China, the Dominican Republic, Bangladesh and Turkey, witnessed an impact on their economy following the establishment of such zones, through increases in exports, the industrialization of some areas that were predominantly rural or the establishment of policies that accelerated those countries’ development.

Colombia’s free trade zones are also seen as a development tool that encourages job creation and the investment of new capital. Some are established in specific departments to promote that region’s competitiveness, encouraging the generation of economies of scale and facilitating some procedures in the buying and selling of goods and services.

The growth of an entire country

A 2016 study, made by the Andi Free Trade Zone Chamber, revealed that Colombia’s free trade zones had more than 840 users and the majority (85%) were dedicated to the industrial activities of goods and services. This reflects how free trade zones have become an investment alternative for companies’ different activities in a way that benefits not just the companies, but the growth of an entire country.

In the same year, the free trade zones were responsible for generating 65,222 direct jobs, and 174,058 indirect jobs, in the country.

One other important figure is the contribution free trade zones make to exports: they make up 12% of the export of Colombian products, not including energy products, and 6% of total exports.

Exports from Colombia’s free trade zones, bearing in mind the Caribbean region has the highest concentration of these zones, went from 2.5% of Colombia’s total exports in 2005 to close on 6% in 2015. The zones also played a key role in imports, rising from 2% of the country’s total imports in 2005 to 4.5% in 2015, converting them into a tool that serves the local market.

To best understand how free trade zones have become an investment alternative, it’s important to note how 50% of the companies in those zones that receive foreign investment, make exports. Their sales represent 68% of the total sales from free trade zones, a value close to 5 million dollar.

What are the benefits of Colombia’s free trade zones?

Finally, and to encourage you to become part of Colombia’s free trade zones, or to invest in them, here are some of their benefits:

You may also be interested in: Colombia´s permanent Free Trade Zones Directory