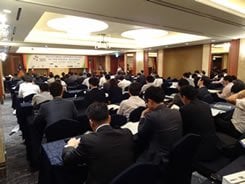 Countries from the Pacific Alliance presented investment opportunities in Korea

Seoul, Korea. As part of the cooperation activities between the Pacific Alliance member countries, the promotion agencies from Chile, Colombia, Mexico and Peru and in conjunction with their corresponding embassies in Seoul, presented a portfolio of investment opportunities offered by their countries to a group of 150 Korean entrepreneurs from a variety of industry sectors from the Asian country.

During the seminar, which was held at the Lotte Hotel in Seoul, representatives from PROCOLOMBIA, ProMéxico, Proinversión and ProChile introduced their investment opportunities to a group of 150 entrepreneurs in areas such as infrastructure, energy, oil goods and services, mining, information technologies, biotechnology, tourism, among others.

In addition, some foreign companies explained their success stories in operations with the Pacific Alliance and, additionally, networking sessions were held where the participants were encouraged to ask more specific questions on investment and the business opportunities contemplated in this agreement.

The seminar was supported by the Federation of Korean Industries (FKI) and the Inter American Development Bank.

According to the Central Bank, over the past three years South Korean investment in Colombia has concentrated on the sectors of transportation, construction development, real estate, power and industry. Furthermore, PROCOLOMBIA has identified investment opportunities from that country in the automotive, textile and electronic component industries.

Within the framework of leveraging the Free Trade Agreements, PROCOLOMBIA has also detected some potential investment sectors for South Korea to export to other countries from Colombia, including countries with which trade agreements are currently in place, such as Chile, a member of the Pacific Alliance.

For the latter, tangible business opportunities have been identified in electronic devices and the metal-mechanics sector. Other Free Trade Agreements such as the one with Canada can be harnessed for the automotive, food and tobacco, electrical and electronic industries. Possibilities with the United States are open for the automotive, food and tobacco, and electronics sectors, and as for the Northern Triangle, metal-mechanics and auto parts.

The Pacific Alliance is an initiative that has been led since last year by the Heads of State of the four member countries, and it seeks deep integration between the people and their economies. The Pacific Alliance seeks to promote further approach between the governments and corporate sectors of the member countries, as well as a more active involvement of the private sector in the diversification of trade and investment flows.

It is also a platform for political and economic cooperation between Mexico, Chile, Peru and Colombia, intended to strengthen trade relations and establish joint investment and trade promotion activities with the Asia-Pacific countries.

This joint effort will be key for the agencies in their intent to find new business opportunities for companies in their countries, as well as to attract more tourists and investors.  This agreement will strive to increase economic complementation and foster growth, development and competitiveness in foreign trade.