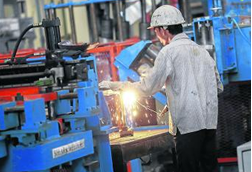 According to the National Administrative Department of Statistics (Departamento Administrativo Nacional de Estadistica, DANE), economic growth accelerated in 2014 compared to 2013, with an improvement of 4.3%. The GDP in 2014 was slightly under the expected growth.

According to Mauricio Perfetti, Director of DANE, 8 sectors showed growth and 4 more were above 4.6%, with the construction industry coming ahead with an increase of 9.9%, followed by services, financial, real-estate, and trade sectors.

The executive acknowledged that the great performance by the construction industry in 2014 is mainly due to a growth of 7.4% in building construction and 12% in civil works.

International Monetary Fund (IMF) estimations indicate that the Latin American economy increased by 1.2% in 2014, where Colombia stood out with a 4.6% variation.