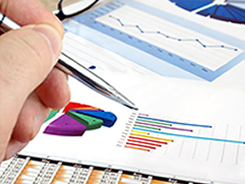 The National Department of Statistics in Colombia (Departamento Nacional de Estadísticas, DANE) informed that the Gross Domestic Product (GDP) in 2012 reached 4%, which attests to the growth shown by the national economy in the last few years. Since 2010, the GDP has averaged 5.1%.

According to the President of PROCOLOMBIA, Maria Claudia Lacouture, this indicator places Colombia among the most dynamic and business-friendly economies in the world.

According to the DANE, this result is based on the growth shown by a number of sectors like trade, repairs, restaurants and hotels, transportation, storage and communications, financial agencies, insurance, real estate and company services; social, community and personal services, among other sectors.

Industry activities with a positive line of action included: beverage preparation, with a 5.8% variation; and knitting and crochet products and textile manufacture with a 6.5% variation.

In the case of final consumption, the most prominent increase was the consumption by the Government (5.1%); while regarding investment the main increases involved machinery and equipment (7.7%), and construction (5.6%).