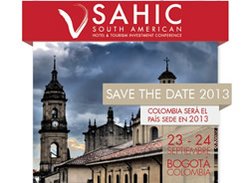 Colombia will host the 2013 SAHIC summit

The city of Bogotá will be hosting the most important annual conference on hotel and tourism investment in the region, next September 23 & 24 of 2013; SAHIC - the South American Hotel Investment Conference, will gather the most important stakeholders in the international hotel industry in search of new business opportunities.

Bogota will then join cities like Buenos Aires, Santiago de Chile, Cartagena de Indias, Rio de Janeiro and Lima, which had previously hosted the event. The announcement was done during the closing session of SAHIC this year, where PROCOLOMBIA presented all the opportunities that different destinations in the country can offer for the development of hotel projects, this includes Bogotá, Cartagena, Medellin, Cali, Santa Marta,  the Coffee Triangle, and Santander among others.

"Colombia is a true home to Sahic, and a vedette when it comes to being at the center stage and attracting our participants, who renew their interest every year in knowing Where, How and Who to do business with in South America", stated Arturo García Rosa, Chairman of SAHIC and Chairman of HVS South America. "International tourism growth of 10.3%, over the global average of 3.4 per cent in the last 10 years according to the TWO, skilled and available human capital, incentives for investment that include the exemption of income tax for up to 30 years, and a broad regional offering; are some of the characteristics that have come to the attention of many investors in the sector for considering Colombia as a business destination", he added.

On the other hand, the chairwoman of PROCOLOMBIA, Maria Claudia Lacouture, confirmed that "Colombia has become a benchmark for hotel investment in Latin America. The arrival of renowned international brands such as Hilton, Marriott, IHG, Accor and others, during the past few years, is evidence enough. She added that "Having the most important decision makers in the international hotel sector, in our country, will allow for us to show the opportunities that this sector has to offer in the entire country".

SAHIC is held in a different city of South America every year. From its first edition in Buenos Aires (2008), it has been sponsored by the governments of countries where it is held, and it has the important support of companies and investors from the hospitality industry. After the first edition, the event has been held in the cities of Rio de Janeiro (2009), Cartagena de Indias (2010) and Santiago de Chile (2011). In 2010, when the event was held in Cartagena de Indias, business venture that promoted investment in the hotel industry in the country took place, with results such as the investment of a Spanish company in the Mar de Indias project in this city.

Next year, the conference will continue to seek: