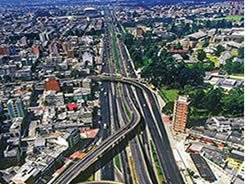 Bogotá. A new article published in the Wall Street Journal Americas, one of the most influencing economic media worldwide, has ranked Colombia and Peru as the “new Latin American tigers”, countries that given their current economic conditions, have become the core for foreign investment in the region.

“Colombia and Peru stand out within the group, thanks to their fast, continuous growth. Their currencies are sound and stable; they have managed to control inflation, their credit rankings are higher than surrounding countries and their governments are willing to act when the environment deteriorates", as indicated in the publication.

Furthermore, it highlights that given the abundant young population, the growing middle-class, the relatively low debt and the dynamic expansion, they become a viable investment possibility that both countries share, and which supports their new status as "economic Latin American tiger".

According to the Wall Street Journal, the improvement of security conditions in the past years has been conclusive for the outstanding increase in foreign capital investment in the country.

Likewise, it states that the national economy is promoted by the raw material boom.  "Colombia has also developed a mid-class that has promoted sectors such as retail, manufacturing, communications, housing, transport and tourism. Its population is also young, which constitutes a key factor to foster growth. 40% of Colombians are at least in their 20s and 80% are below the age of 50, as indicated in another section of the publication.