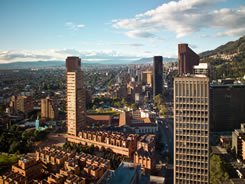 Colombia one of the most attractive countries to invest

The organization dedicated to promoting investment between countries and connecting corporate leaders with investment promotion agencies, emphasized that the work PROCOLOMBIA is doing to attract Foreign Direct Investment (FDI) has been key in naming the country as the future global investment destination.

The accolade was made by the FDI Association, during the first FDI Awards in China, where jurors of the FDI Award also praised PROCOLOMBIA as an example for similar promotion entities.

"It is a very treasured recognition and a vote of confidence in Colombia as an attractive business-friendly destination, and to our organization that has launched in over 30 countries, a strategy which allows us to provide personalized information to companies that have expansion plans and offer them ongoing and confidential support to help them explore the opportunities the Colombian regions are able to offer", said Maria Claudia Lacouture, president of PROCOLOMBIA Colombia.

During 2013, PROCOLOMBIA facilitated the arrival of 55 investment projects worth an estimated investment of U.S. $ 1.519 Billion and the creation of 10,280 new jobs in 15 departments.

Sectors and regions where investors plan to create jobs through their projects:

Colombia was listed among the top emerging countries in the world receiving foreign capital, after receiving $15.8 billion USD in foreign capital in 2012. The country also led the growth in South America regarding this item, rising from the 28th spot in 2011 to the 18th spot.

According to a report by UNCTAD, one of the decisive factors to attract FDI is a fast-growing middle class, with GDP per capita in Colombia rising from USD $5,826 in 2000 to USD $10,350 in 2012. This has become a key contributing factor in the arrival of transnational corporations into the country.

According to the latest surveys by Fedesarrollo (private think tank), among the 47 million citizens in Colombia, 11 million belong to the middle class, and by the year 2020 this figure will reach 19 million.

Other reasons why Colombia stands out as an attractive investment destination include its stability and the opportunities for foreign entrepreneurs, as Colombia is the first country in Latin America in terms of investor protection and the third most business-friendly country, according to the World Bank Doing Business Report 2013.

Foreign investors are also attracted by Colombia’s growing economy. The mean gross domestic product growth since 2010 is 4.9%, which is above the region's average of 3.2%.

The work that PROCOLOMBIA has done to attract foreign direct investment and the management of their system Enabler to Attract Investment (SIFAI) has stood out among 55 investment promotion agencies in the world that also applied for the global innovation award within this field.

PROCOLOMBIA was one of the two entities recognized in the category of Promotion Policies at the Financial Times’ FDI Intelligence global innovation awards.

PROCOLOMBIA is committed to improving the business climate in the country. The System Enabler to Attract Investment is a public-private tool that allows the identification of the impact from sectoral economic reforms. Its online platform allows data collection and potential improvements that can result in the creation of new jobs and solutions that encourage new investments “stated the FDI Intelligence report.

FDI Intelligence chose the winners of the 2013 Investment Promotion Agencies Innovation Awards taking into account innovative promotional practices from those entities that contributed to increase competitiveness and who seek to go beyond servicing entrepreneurs as an evaluation criteria.

Some of the 2013 SIFAI activities

Foreign trade: Influence to lessen the requirements to access the VAT exemption for export of services.
Film Industry: Effort to extend the benefits of the Film Law to the digital animation industry.
Immigration regime: Participation in the immigration reform where the requirements for obtaining work visas and investor visas related to real estate acquisition