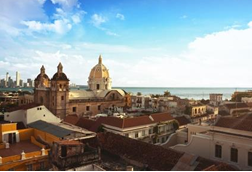 Philippe Preite, a senior analyst with the global financial services company Credit Suisse, visited Colombia and spoke to business leaders about his vision for the country. Preite is based in Panama, and he believes that Colombia is the Latin American country that can create the best business opportunities thanks to its economic growth outlook, political stability, and general conditions.

Preite explains that, given that the largest countries in the region are not currently at their best, Colombia is rising as a land of opportunity that is betting on services to complement traditional energy-mining exports. As a result, the decrease in global oil sales does not affect the country as much.

Preite says that “The world is realizing that Colombia is entering an advanced stage of development and that it is becoming the third most important economy after the two ‘elephants,’ Mexico and Brazil.”
The Credit Swiss analyst thinks that one of Colombia’s strengths is that the country doesn’t fully depend on exports because about 50% of its economy is services-based.

Preite says that Colombia is rising as a land of opportunity that is betting on services to complement traditional energy-mining exports. As a result, the decrease in global oil sales that has hit the global economy in the past weeks is not affecting the country as much as others.

“There is no question that economic cycles, consolidation periods, and times of political change bring difficulties and challenges, but progress in infrastructure, administrative transparency, and regional integration are leading us in the right direction. For a company like Credit Suisse, being in Colombia is something to be proud of,” said Preite.