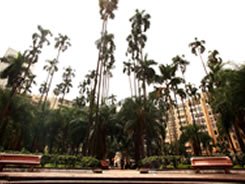 Bogota, February 10, 2014. The Cali Marriott hotel is located in the heart of the city in the exclusive neighborhood of Granada. This is the financial and corporate district of Cali where different gourmet restaurants, designer shops, top clubs and bars, and other tourist spots like El Paso del Puente Ortiz, El Paseo Bolivar, Plaza de la Caleñidad, and Centenario Mall (Centro Comercial Centenario) are located. Under their philosophy, “The Place to Be”, this hotel offers vibrant settings that will become the city’s fashion and entertainment meeting point.

The Cali Marriott is managed by Real Hotels and Resorts (a subsidiary of El Salvador’s Grupo Poma) and is the third hotel opening in Colombia after the successful launches of the Bogota Marriott Hotel (2009) and the JW Marriott Hotel Bogota (2010).

“PROCOLOMBIA has counseled and supported this business group for seven years to develop this project. Marriott is among the 14 foreign investment initiatives we have sustained in Valle del Cauca since 2010”, declared Maria Claudia Lacouture, President of PROCOLOMBIA Colombia.

Lacouture also highlighted that the inauguration of the Marriott hotel in Cali comes in perfect timing, as there was an 10.8% increase of foreign travelers in 2013 vs. 2012. According to the Immigration Department of Colombia.

The history of the group and the recognitions they have earned through TripAdvisor, the Travelers Choice Award 2014 and World Travel Award, represent a seal of quality in the capital of Valle.

“Our hotels are evolving towards a new philosophy; “The Place to Be”, where leisure, gastronomic diversity, and business character converge. Together with the investment opportunities available in Colombia for the hotel industry, it encourages us to keep investing in the country”, stated Fernando Poma, Executive Vice-President of Real Hotels & Resorts.

According to fDi Markets, PROCOLOMBIA reported that Valle del Cauca was the fourth top destination regarding foreign investment in Colombia between 2010 and 2013.

The Immigration Department of Colombia reported tourist arrivals in Cali between January and October of 2013 to have increased as follows: 1.5% for American tourists, 12.4% for Ecuadorian tourists, 0.4% for Spanish tourists, 9% for Peruvian tourists, and 18.6% for Mexican tourists.

Additional features include ergonomic chairs, memory foam mattress beds, roomy and fully furnished bathroom, LCD TV that connects to other devices, and an iPod dock/radio-alarm clock. The hotel also has a 60-MB Internet service; the highest speed available in the city.

“Build your own” Gastronomic Services

Following the “Build your own” concept and its varied menu choices, The Market is setting the new trend for the restaurant scene in Cali. In this establishment, visitors will enjoy a variety of dishes including pizza, salads, carpaccio, soups, pasta, or burgers and sandwiches freshly prepared with your choice of ingredients, from beef, fish and seafood, a crepe station, not to mention a wide range of traditional dishes.

The Market’s comfort, casual ambiance, and modern lighting create an enjoyable experience to be with friends, colleagues, or family. Thanks to these gastronomic and entertainment services, guests will find everything they need in a single place without ever leaving the hotel.

This is the second restaurant by the group to follow this concept, and two more restaurants will open soon in Guatemala and Tegucigalpa.

The Tanoshii lounge and sushi bar is the third property the hotel group has opened. It comprises a plunge pool with a trendy lounge ambiance. Its specialty is sushi, freshly prepared at the bar by the Sushi Chef, including “saketines” and other signature cocktails. With accessible prices and a vivid live music ambiance, this place is among the top favorites in the city.

At the Health Club, guests and city locals can experience body treatments, massage rooms and access to the gym. In addition, there are laundry and dry cleaning services not to mention the Marriott Rewards program to round up the selection.

Out of the 19 hotels in the Americas managed by the Real Hotels & Resorts, 17 have received awards by highly renowned hotel and tourism institutions like TripAdvisor and World Travel Award.

In 2013 the JW Marriott Bogota and the Bogota Marriott hotel, among others, received the 2013 Travelers’ Choice award as “the best of the best in the travel industry regarding services, quality, and customer satisfaction”. Award winners are selected based on the recommendations by guests, considering not only the popularity of the premises but also the great customer service.

World Travel Awards - the leading institution formed to acknowledge and reward excellence of companies that comply with the highest service standards in the tourism industry- has granted Real Hotels and Resorts’ hotels the following awards: The JW Marriott Guanacaste Resort & Spa was awarded the Mexico & Central America's Leading Spa Resort 2013 acknowledged as the best hotel in Mexico and Central America. This hotel also received the Costa Rica's Leading Spa Resort 2013 and the Costa Rica's Leading Resort 2013 award as the best spa resort and the best resort in the country.

Fernando Poma, Real Hotels and Resorts Corporate Vice-President
Real Hotels and Resorts manage the Cali Marriott hotel, a hotel division within Grupo Poma. Fernando Poma, Executive Vice-President of this subsidiary, was born in San Salvador on August 24th, 1971. He received his Bachelor's Degree in Hotel Management from the School of Management at Cornell University. He also has an MBA from Wharton School of the University of Pennsylvania.

Mr. Poma is an active Executive Board member at Grupo Roble, Fundasalva, and the Graduate School of Economy (Escuela Superior de Economia). He is also a member of the Young Presidents' Organization.

Before taking the lead at Real Hotels and Resorts, Fernando Poma was an assistant at the European Choice Hotels International’s executive office and worked as a strategic planning analyst at Westmont Hospitality Group. He also played a key role in the acquisition of hotel chains Orion and Citadines in Europe.

Thanks to the construction of the Cali Marriott hotel, Real Hotels and Resorts (a subsidiary of Grupo Poma) will expand their investments in Colombia and establish a new venue in the capital of Valle soon to be known as “The Place to Be”.