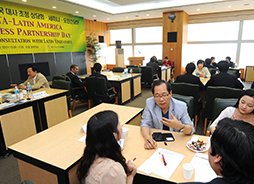 Seoul. PROCOLOMBIA and the regional investment agencies of Barranquilla, Cali and Bogota will participate in the Korea Overseas Investment Fair, one of the most important investment fairs in South Korea. They will hold private meetings with South Korea's 10 most important conglomerates and businesses.

This was stated by PROCOLOMBIA President, Maria Claudia Lacouture, who also indicated that on May 28, Colombia will present the investment opportunities identified by the organization in various sectors to more than 80 companies. The sectors identified as having potential for South Korean investors include automobile, agribusiness, BPO, software and IT services, and equity funds.

During the panel session, special emphasis will be placed on large infrastructure projects. The profile of the South Korean attendees suggests they will be able to contribute their knowledge and experience of investments of this type in the whole country. "In Korea, there are large conglomerates specialized in this area, that are interested in economies with legal stability like Colombia," Lacouture indicated.

This event is one of the most important integration opportunities for the two countries, which will have an active trade agreement within the next few months. It will also be an opportunity for Barranquilla, Cali and Bogota to showcase their competitive advantage, since the Asian region considers Colombia an attractive investment destination.

Representatives of Barranquilla and Valle del Cauca will visit Busan, the main port of South Korea and the fifth largest in the world, to learn about South Korea's operating system and to invite South Koreans to participate in the expansion projects of the two regions.

Within the framework of this fair, PROCOLOMBIA organized personalized meetings for Invest Pacific, ProBaranquilla and Invest in Bogota, with companies from the manufacturing sector (petrochemicals, plastics and technology) and the urban passenger transport sector.

On the May 22, Colombia's promotion agency held a presentation the seminar: "Latin America as an Investment Destination." It was organized by the Korean International Trade Association (KITA). Colombia's economic progress and its advantages for attracting foreign direct investment in diverse sectors and regions were showcased. Korean small and medium enterprises in particular favored Colombia for their investment options in Latin America.

"The four member countries of the Pacific Alliance (Colombia, Chile, Peru and Mexico) participated in this event. In our particular case, we presented the advantages that will allow the Korean companies to make the most of the country as an export platform, and the logistical efficiencies this would represent, as well as the advantages expected from the FTA between Colombia and South Korea, such as avoiding double taxation," Lacouture added.

This coming August, another event will be held in South Korea with the promotion agencies that form part of the Pacific Alliance. Its aim will be to make known the benefits in terms of trade, investment and the free movement of people between the member countries.

According to the Bank of the Republic's Balance of Payments, South Korea registered an accumulated FDI in Colombia of USD 70.1 million in the 2000-2012 period.

Investment peaks were recorded in 2007 and 2012, when the figure reached USD 36.3 million and USD 14.4 respectively (due mainly to investments concentrated in the sectors of transport, trade and construction).

According to fDi Markets data, a Financial Times data analysis unit, during 2003 and the first quarter of 2013, the automotive assembly and consumer electronics industries topped the list of sectors that received Greenfield projects from South Korea in Colombia, with a share of 50% (4 projects) and 25% (2 projects) respectively, followed by auto parts and communications, each with a share of 13%.